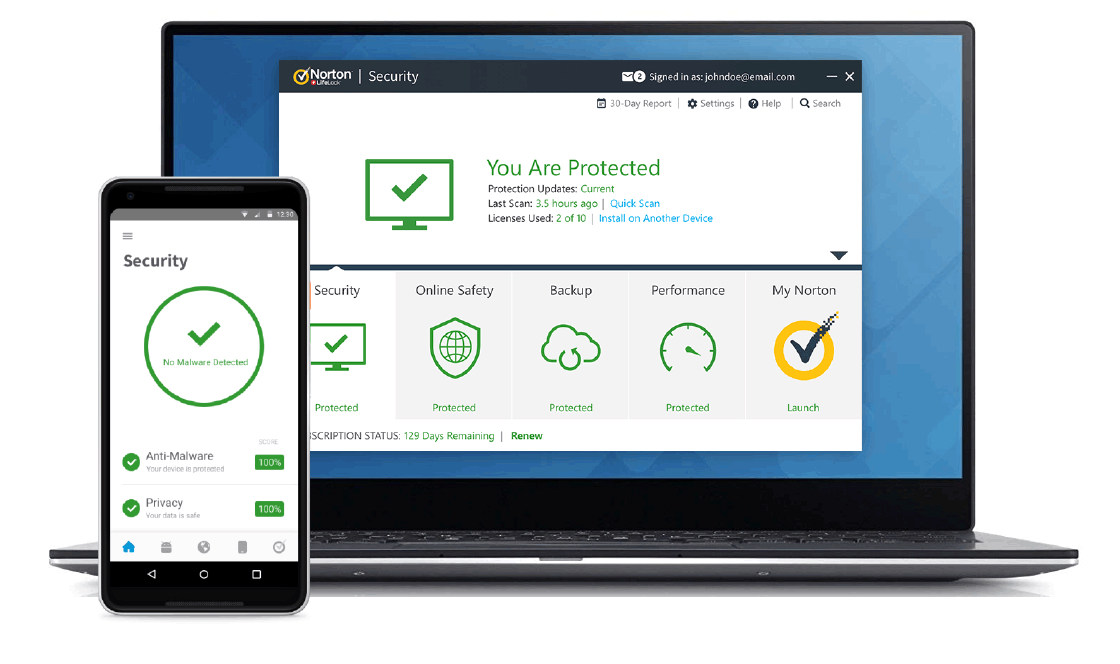 Norton LifeLock is a touch above the Norton Deluxe plan. Norton Deluxe is perfect for PC users who want cybersecurity that goes beyond the age of standard closed antiviral programs. Norton LifeLock, on the other hand, takes the step beyond the casual PC user needs. It provides protection for business owners who want to shield their assets online. The financial protection includes even reimbursement protection for online theft.

Key differences between Norton Lifelock and other Norton 360 packages

Norton 360 by Symantec has three separate subscription based packages. There is Standard, Deluxe, and LifeLock. They range in price from 80 to 150 dollars on average. There is also a Norton 360 LifeLock “ultimate plus” subscription that is normally 400 dollars. Sometimes, the packages go on sale and you can save up to $60. See recent sales at the best value page.

The key differences between the Norton 360 packages are the number of devices they cover. Norton 360 standard covers one device. Norton 360 Deluxe covers five devices. Norton 360 with LifeLock Select covers five devices. Then, Norton 360 with LifeLock Ultimate Plus covers unlimited devices. The Norton company estimates this is the best value package for Norton 360. It has the highest rate of stolen funds reimbursement.  Other key differences include the level of technicality each package protects under. Norton standard, for example, offers most of the same stock protections as all the Norton 360 packages but none of the financial protections. Norton 360 Standard also has the lowest GB storage at 10GB. Also missing from the standard plan is the parental control feature. For some, the parental control feature is a must. So, for those consumers, Norton Deluxe or higher is the choice. Norton 360 with LifeLock includes all of the standard and deluxe features. Then, it tags on those funds management features. This is what Norton means by “LifeLock.”

Breaking down Norton 360 with LifeLock

The exact range of services offered by Norton 360 with LifeLock includes the following: PC Cloud backup, online threat protection, Virus Protection Promise_which is basically a personalized tech support, password manager, support 24/7_which is basically a customer service desk that answers all your questions_, and parental controls under the “device security” tier. Then, under “online privacy” it offers the following:

Note, there are two LifeLock plans. There are marked differences between them. For one, the LifeLock Select plan doesn’t offer all of the same protections as LifeLock Ultimate Plus.

With the key differences between Norton 360 Standard, Deluxe and Lifelock out of the way, now it’s time to move on to the differences between the two plans with LifeLock. The difference is that Lifelock Select does not offer the listed services past lost wallet protection. This means that the credit, checking and savings account activity alerts, annual credit report and score, court records scanning, data breach notifications, checking and savings account application alerts, 401k and investment account activity alerts, and bank account take over alerts are only available on the LifeLock Ultimate Plus plan.

Easier to miss differences between LifeLock Select and LifeLock Ultimate Plus

Making a choice based on your priorities

However, you should pay attention to what truly matters to you about value comparison. For example, coverage for lawyers and experts is the same on both the LifeLock Select and the LifeLock Ultimate Plus plans. That is $1 million dollars for lawyers and experts. You don’t lose any value in this department if you want to pay the lower premium of the Norton 360 LifeLock Select.  Yet, then, if credit reporting is more important, you need to compare the value differences again. LifeLock Select will offer credit monitoring for up to one credit bureau.  If the other services only available on LifeLock Ultimate Plus plans are not that important to your business model, then you may not want to pay for the more expensive premium. That said, Ultimate Plus’ offer on annual credit reports and scores is a bit too good to pass up. It offers this service on up to three bureaus at a time. For a growing business, this could be a great asset to future growth. So, even while Ultimate Plus has a higher annual premium, the value it includes makes it a better deal overall for the user who has business interests in applying Norton 360 to their PC.

The plans are attractive and moderately priced given what they are. How efficient are they? PCMag has ranked LifeLock at 4.5 out of 5 stars. They describe LifeLock as “Excellent.”  PCMag lists the pros of LifeLock plans as follows: includes LifeLock identity theft mitigation and “no-limits” VPN, excellent security protection, supports Windows, mac OS, Android and iOS, has virus protection promise.  Then, PCMag listed the cons as follows: security protection “limited” on iOS devices, no parental control backup for mac OS. It also notes that Norton LifeLock cannot actually prevent identity theft. At best, it serves as a form of cyber insurance to shield an online user’s identity and then to provide bail out options if their identity is compromised.  PCMag’s review team then compared Norton 360 with LifeLock to other leaders in online identity shield software. Despite the issues they found with iOS devices, PCMag reasoned that Norton’s LifeLock protection,”goes beyond,” what the competing products offer. A touch above service is what you are looking for, and for a comparable price to other leaders, Norton 360 suites are sure to deliver this “extra” service.

PCMag then proceeded to describe Norton with LifeLock as a “hands-on” experience in identity protection. When you sign up for the product, it asks for more than the usual ID information. It needs your name, birthday, SSN, anything that is associated with your legal identity. This information is submitted and then you are given a My Norton dashboard. The My Norton dashboard is where you will have the most control over what the security suite is doing. Here you have the ability to freeze information to bank and online pay accounts.

What users are saying

Even with a full breakdown of the product value, sometimes you may still be unsure about making a purchase decision. You’ll want to hear what other users thought first. Below follows a collection summarizing the recent opinions on Norton LifeLock over a variety of newscasts, blogs, and so forth.

PCMag gave Norton 360 with LifeLock a 4.5 out of 5-star ranking with the phrase “excellent,” as its bottom line opinion.

Tom’s Guide gave Norton 360 with LifeLock products a 4.5 out of 5-star ranking. They stated that it has “almost everything” you could ask for out of antivirus protection.

U.S. News gave Norton 360 with LifeLock a 4.2 out of 5-star ranking. Among its pros, U.S. News included that the plans come with a 60-day money back warranty. It also explains that the protection is provided in partnership with Norton 360. However, U.S. News saw that adding a child to the plan costs $5.99 per extra add-on. They thought this was a hidden cost that detracted from the value.  U.S. News likewise praised the 24/7 availability of Norton with LifeLock customer service. LifeLock also has self-service options via the member portal. The user is allowed to have as much “hands on” involvement with the platform as they desire.

Every outlet that has reviewed Norton so far has loved it. Safety Detectives sings its praises giving it 4.9 out of 5 stars. They call it “outstanding.”  Norton of today converted the reviewers' formerly bad opinion of the software to a positive outlook. The only thing that this reviewer downvoted was the features section, favoring competitors in this respect. All else, especially customer service and security, was given highest marks.

Safety Detectives also gave some technical background regarding Norton 360 with Lifelock. Norton software uses SONAR technology. SONAR is an acrostic which stands for Symantec Online Network for Advanced Response. The SONAR system uses heuristics that analyze the behavior of the files it scans. SONAR is effective against detecting zero-day threats. Zero-day threats come from emerging developments in new malware.

Heuristics are problem-solving methods that look for a practical solution in a short-term span to a problem as it presents itself. Heuristics were developed in ancient Greek mathematics. They are not guaranteed to be perfect, optimal, or rational in mathematical terms, but they get the job done. SONAR is able to use these problem solving practical computations in its software to tackle each file as a puzzle that needs solving. This is an objective approach to the problem of undocumented threats in new malware.

Buyer’s Guide gave Norton 360 with LifeLock a 9.0 out of 10-star review. LifeLock by itself received a 10-star rank. Buyer’s Guide states that the 100% guarantee of Norton 360 tireless service was a key factor of the appeal to customers. They also noted that the subscription-based nature of the service made it attractive. Most users were pleased to have their antivirus and cybersecurity managed under a subscription service rather than software.

The consensus on Norton 360 with LifeLock is that it has unparalleled security and customer service in the identity theft prevention and antivirus protection field. It has received an average of 4.5 out of 5-star to 9 out of 10-star rankings. The My Norton dashboards give the user strong hands-on access. The technology behind SONAR is quick-learning and adapts to the 2020 era of cybersecurity threats.  The verdict then is that this is the best that exists in today’s market compared to other similar subscription based services. It costs more than returns its investment. Norton 360 with LifeLock is a software that is famous and deserves the highest recommendations that can be given to it.  For more information on Norton 360 with LifeLock products visit the technology information page at LifeLock.com